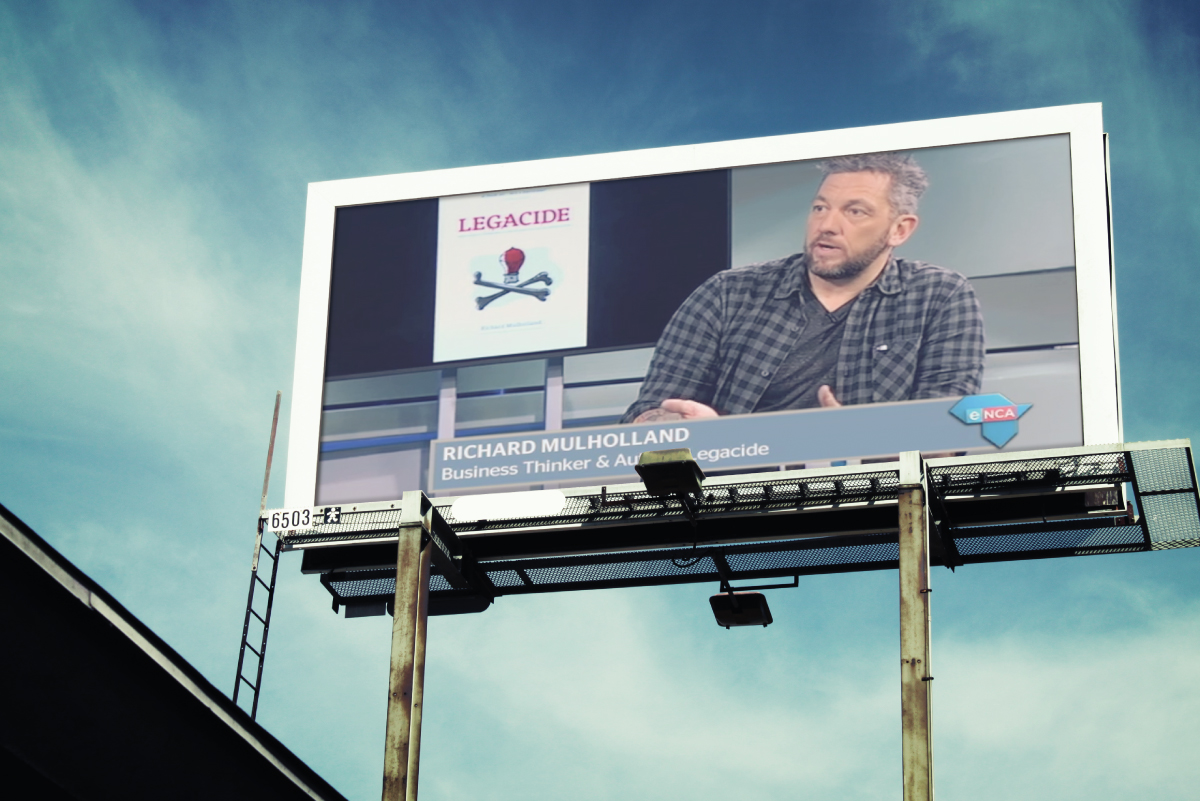 I was recently sent a short clip of eNCA’s ‘Maggs on Media’ interview back in May 2017, which featured Richard Mulholland – business thinker, highly regarded speaker and author of ‘Legacide – why legacy thinking is the silent killer of innovation’.

I’m not sure whether Richard was bemoaning the entire global advertising industry or a specific region (presumably South Africa). In any case, Richard believes it is the least evolved industry. He commented that the banking world has evolved banking and yet agencies 50 years ago had creative directors and copywriters, which still exist in the same form today. Richard feels the advertising industry is so far up their a**, only caring about awards. He later went on to say that awards should go, as they are promoting the wrong behaviour; they promote creative work rather than effective work.

I had never heard of Richard Mulholland until I watched this interview, but I found his views refreshing. He has strong opinions, but I like that. Whether I agree with him or not, I believe the creative industry should have more people like Richard who express their opinions in such a raw and direct manner.

I don’t necessarily agree that awards should become redundant, as I believe awards are recognition for exceptional work… I’m just not sure all awards are unbiased and awarded fairly. But I do feel the advertising industry needs to take his remarks on board, as well as anyone who works within marketing, communications and related professions.

In my opinion advertising in some sectors follows the same format and can become dull and too repetitive. In some cases, the repetition of stock imagery as well as the over usage of stereotypes are unbearable. Whatever the company, the service or the product, their advertising material leaves me with a sense of déjà vu. To some extent, it’s understandable because originality is almost impossible these days. However, I don’t necessarily look for originality, but whether the preferred approach is appropriate and well executed.

The whole point of advertising is to sell a product or a service and/or convey a strong message, but most industries have fierce competition and therefore the objective is to stand out… and for the right reasons.

For example, everyone knows Nando’s Restaurants and their delicious chicken meals. Nando’s adopted humour instead of their marketing material solely focusing on pictures of their food. These clever and funny one-liners, some of which have references to current events, were a bold and risky move, which ultimately paid off.

Many companies have devised gimmicks such as comparethemarket.com using a Russian meerkat character called Sergei, a wacky concept that made them stand out amongst a sea of insurance companies.

There are many organisations with amazing and inspiring advertising campaigns, which serve as a benchmark. It’s frustrating to see so many others repeating the same styles over and over again, paying a premium for ineffective material. Even serious campaigns such as drink driving can be hit or miss. I’ve seen an advert use beetroots on a chopping board to suggest the impact of losing a loved one stays with their family and friends forever. Beetroots!?

In fairness, advertising is an enormous challenge and as the interviewer said, there’s a comfort in familiarity, we’ve always done it this way… this worked in the past… this is the mind-set Richard Mulholland wants to change. Richard highlighted that in order for change to happen, it must come from the top and filter down. The CEOs and the MDs, they need to change their mind-set and their culture. I agree. Let’s be honest, advertising and marketing is one area of business where you can have some fun!

I’ll finish with a quote from Leon Burnett, the founder of Leo Burnett Worldwide advertising agency…

“Keep it simple. Let’s do the obvious thing – the common thing – but let’s do it uncommonly well.”